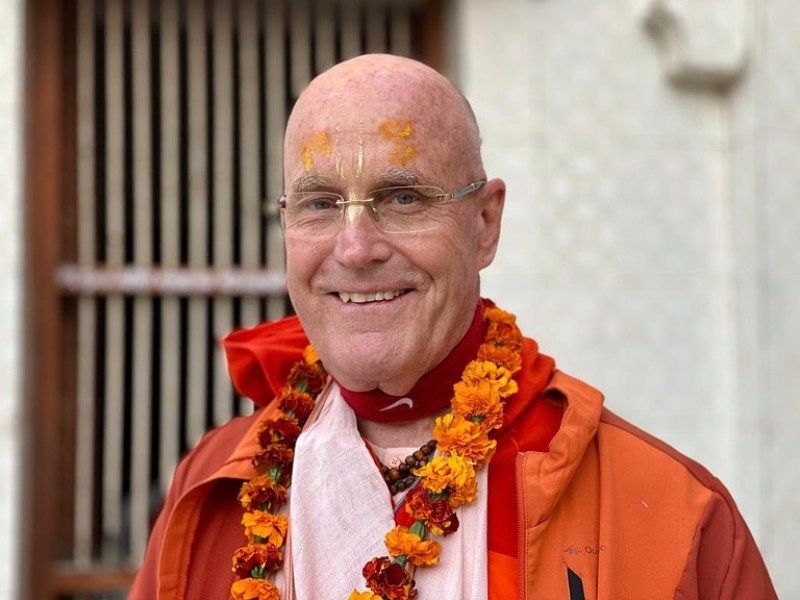 Indradyumna Swami is an American religious scholar of Lord Krishna bhakti and an ISKCON preacher. He served as a marine commando before participating in ISKCON. He was initiated by Swami Prabhupada, the founder of ISKCON, and has travelled across different countries of the world spreading the message of Krishna Bhakti. He gives lectures, organises religious congregations known as sankirtanas, festivals, and tours of Vrindavana. He is regarded as one of the most active preachers of ISKCON.

Indradyumna Swami aka Brian Tidbits was born on 20 May 1949 (age 73 years; as of 2022) in Palo Alto, California, US. His zodiac sign is Taurus. When he was four years old, he was diagnosed with Spinal Meningitis and recovered after being admitted to the hospital and taking medications for multiple months. When he was six years old, he saw an accident in his neighbourhood in which a dog was crushed to death by a car. He attended the local school; however, he was not interested in his studies. When he was twelve years old, his teachers asked the students to draw the food items which they wanted to eat on Thanksgiving Day. Indradyumna Swami drew only vegetables, which his teachers and friends found hilarious and odd, and he later refused to eat meat for which his father became angry with him and sent him to bed without any food. He used to surf on the waves of Stinson Beach, near San Francisco. He was selected in the Marine Corps in the US Army and fought in Vietnam during the US-Vietnam war. He killed many people before refusing in front of his superiors to fight anymore for which he was immediately jailed. After a few days, he was released from jail and discharged from the US Army. 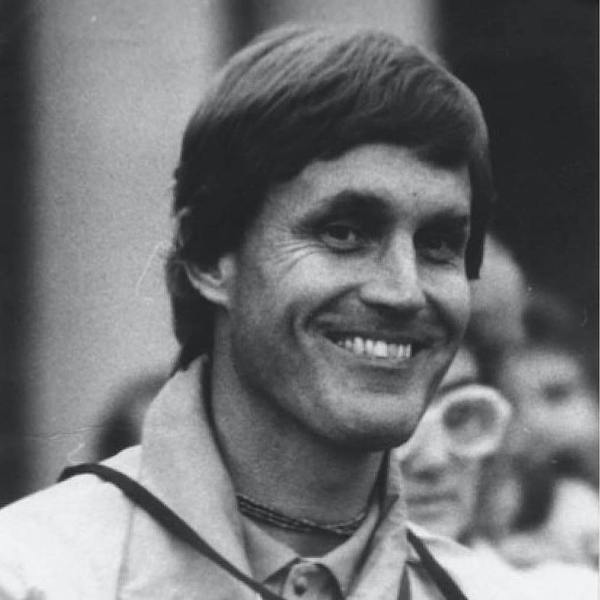 Indradyumna Swami before his introduction to Krishna bhakti movement 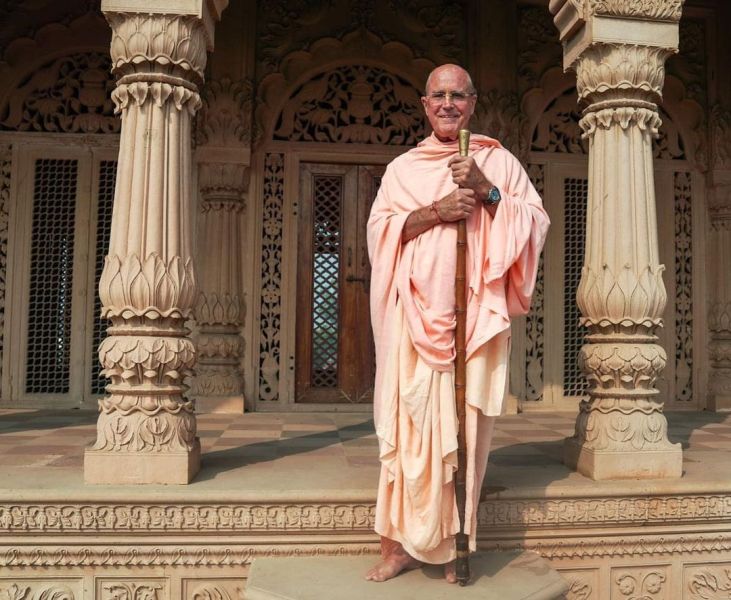 He was born into a Christian family.

Although his mother was not religious, she became a Lord Krishna devotee during the last years of her life and died due to cancer. He has a sister and a brother named Pete. 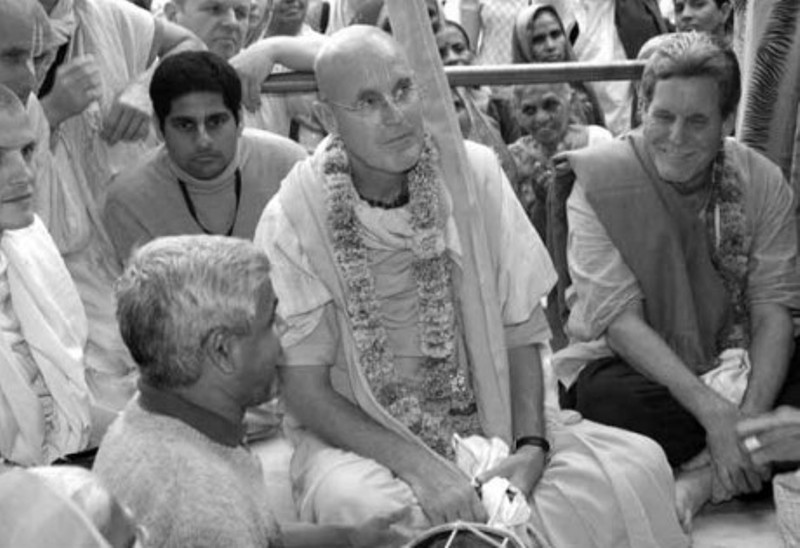 He married in 1970 at the age of nineteen. His wife’s name is Kapmayee Devadasi. He has a son named Gaura-Sakti.

Indradyumna Swami believes in Lord Krishna bhakti and has established many temples, groups, Prasada (food offering for the god) distribution programs, and kirtanas. He has claimed on many occasions that humans shall practice bhakti yoga. He has also claimed that Indians are running behind the material lives of the west, and the westerners are adopting the traditional living style of Indians. He also speaks about Swami Prabhupada’s vision and often encourages his disciples to adopt the Lord Krishna bhakti initiated by Swami Prabhupada like abstaining from drugs and illicit sex, not eating non-vegetarian food, and not indulging in gambling. He described the Vaishanavas as merciful while talking to his disciples and said that Lord Krishna is behind the creation of every living entity in the universe and said,

Vaisnava’s are the embodiment of compassion. This is all accomplished by chanting Hare Krishna Hare Krishna Krishna Krishna Hare Hare, Hare Rama Hare Rama Rama Rama Hare Hare So this incarnation, this maha-mantra appeared from the lotus lips of Caitanya Mahaprabhu 500 years ago and slowly spread around Navadvip and Mayapur. Then Mahaprabhu spread it to South India but His desire was that this holy name would go to every town and village of the world. Why? Because Krishna is the seed giving father of all living entities. He is not just the God of the Hindus! No! All living entities, even the bugs and the germs are Krishna’s devotees.” 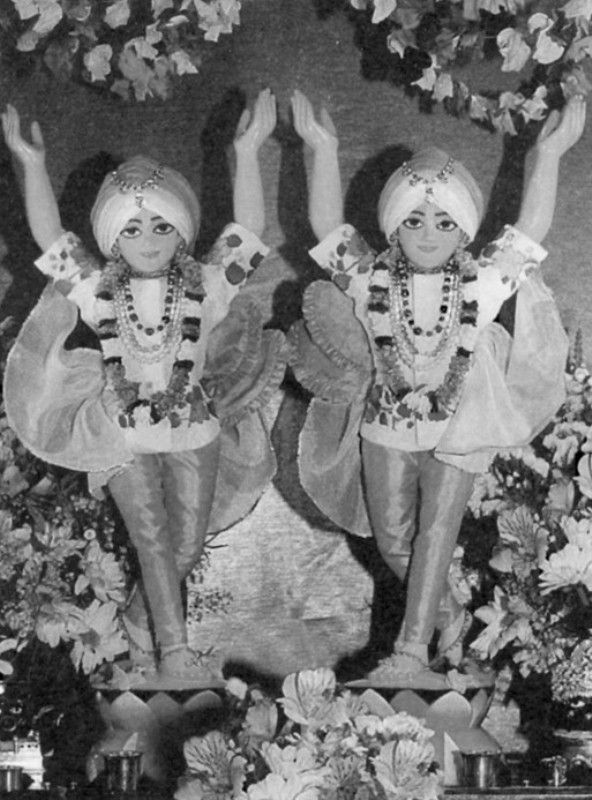 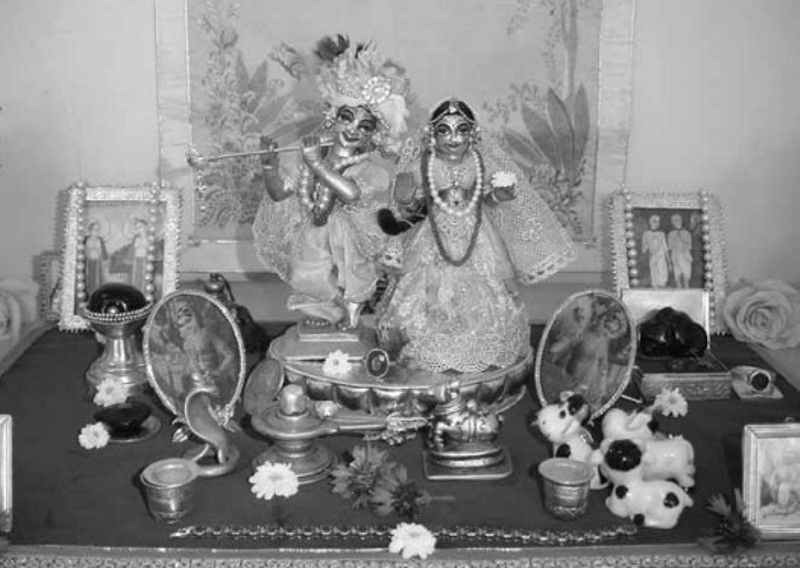 After Indradyumna Swami was released from the US Army, he prayed one day to god to give him shelter. At that time, he was nineteen years old and working as a gardener at the house of the President of the University of Michigan. Indradyumna Swami’s wife was a good friend of the University President’s wife, and she suggested they visit the exhibition of Eastern culture and traditions. The very next day, the couple went to the museum to watch the antique artefacts, and he saw a Rajasthani painting there named Kanha and His Milkmaids enjoying in Heaven depicting the Hindu God, Lord Krishna as a bluish boy dancing with various ladies. He asked a security guard standing there about the painting who did not know much about it. He then tried to find someone else to explain the details of the painting to him; however, it was the museum’s closing time, and he left in disappointment. When he came out of the museum, he saw four monks wearing orange robes on a lawn in front of the museum speaking to a crowd around them. He went to the monks and listened to them chanting the praise of Lord Krishna and saw the pictures of A. C. Bhaktivedanta Swami Prabhupada for the first time in the book Sri Isponishad written by Swami Prabhupada. He was amazed at the dresses, chantings, and praise of Lord Krishna and Swami Prabhupada. He suddenly noticed that one of the monks named Subala was not wearing any shoes, and when he asked Subala why he was not wearing the shoes, he replied that he did not have money and Lord Krishna would provide the shoes for him. After a few minutes of this conversation, a person passed by them and asked the crowd if anyone needed size nine tennis shoes. Subala told the person that he wore a size nine, and the person handed over the shoes to him. Subala then waved at Indradyumna Swami and showed his shoes to him, which amazed him. He later asked the monks named Vinayjana, Subala, Gargamuni, and Brahmananda to accompany him to his house, which they accepted, and on the way, he paid the bill of the ingredients bought by the monks for the Prasada, food offerings to Lord Krishna. Monks stayed with him for three days and taught him about the religious practices, Prasada, and the Hare Krishna movement (ISKCON). When the monks left, they left behind a picture of Lord Krishna, a picture of Swami Prabhupada, and a silver spoon for Indradyumna Swami.

After the monks left, Indradyumna Swami went to the Hare Krishna Temple in Florida; however, when a monk at the temple said that Vinayjana was not welcome at the temple, he became angry and left the temple. He later decided to go back to the temple to know more about Lord Krishna. He started participating in the religious congregations known as Kirtana, distributed religious books such as Bhagavad-gita and Srimad-Bhagavatam and gradually became more inclined towards the teaching of Swami Prabhupada and decided to become a preacher himself. He later attended many religious sessions of Swami Prabhupada and travelled across various cities with him. Swami Prabhupada named him Indradyumna Das and initiated him into the Hare Krishna movement in December 1971. 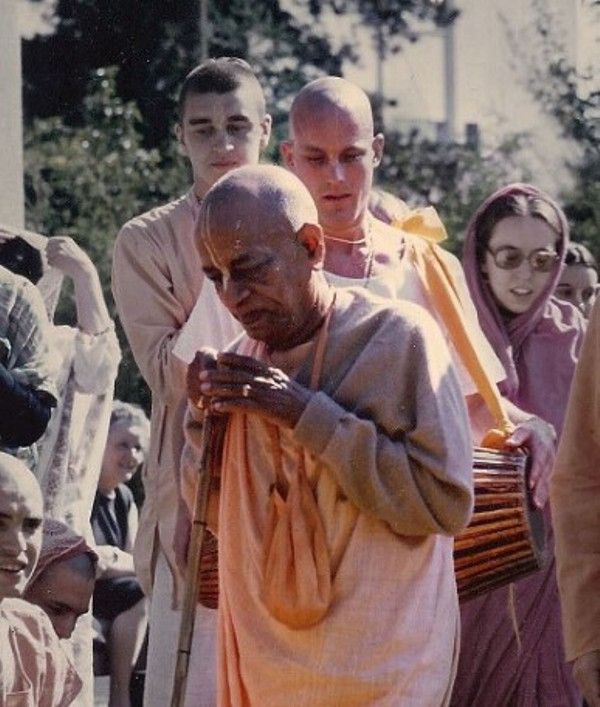 He left the US in 1972 and went to Europe where he helped to open new centres in France, Belgium, Italy, and Switzerland. He lived at the New Mayapura Ashram in (France) with his wife Kripamayee Devadasi and son Gaura Shakti. He preached the teachings of Swami Prabhupada, sang the Kirtanas on the streets of Paris and distributed many books. In 1979, he adopted Sanyas and took the vows in a function held at the Gaura Purnima festival at Sreedhama Mayapura, India and was renamed His Holiness Indradyumna Swami Maharaja. 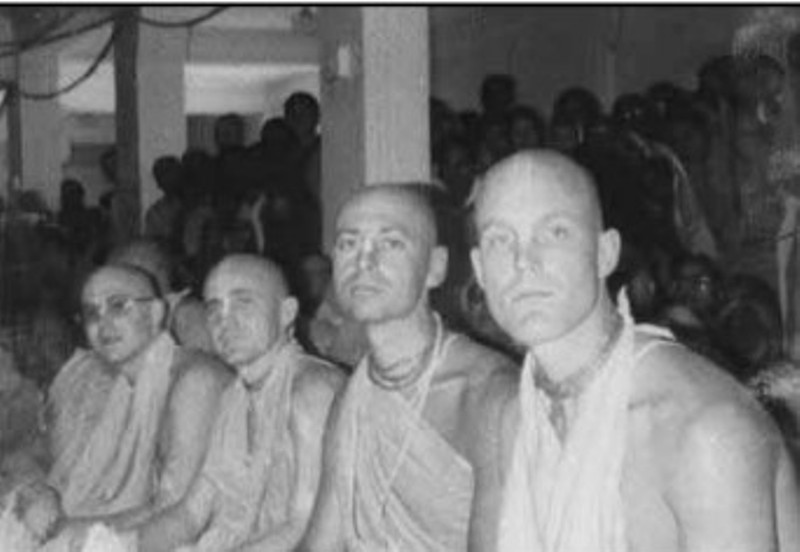 After becoming a Sanyasi in India in 1979, he returned back to France and became the Temple President of the New Mayapura Ashram in 1983. In 1979, he found a travelling festival group that toured all over France sharing India’s spiritual teachings and cultural traditions of music, dance, and food. Inspired by that group, he started the Polish “Festival of India” tour in 1990 and spent two months doing Kirtanas and distributing literature based on the life of Lord Krishna. He also toured various countries including Czechoslovakia, Hungary, Yugoslavia and Russia. He also spread the Festival of India to Australia, Brazil, and the USA touring as Le Carnival Spirituel. In 1988, he toured many South American Countries including Salvador, Recife, and Belem. During that same tour, he became the first ISKCON Sanyasi to travel to the Amazon forest to spread the messages of Lord Krishna. In 1992, he was travelling in South Africa, he was hit by a car and took many months to recover from the injuries. In 1995, he travelled to Russia, Baku, Azerbaijan, and Kazakhstan. He was injured in a bomb blast and recovered in 2 months. In 1996, his Polish Festival of India team participated in the Przystanek Woodstock free music festival organized over the first weekend in August each year by Jurek Owsak of the Great Orchestra of Christmas Charity and set up a spiritual tent called “Krishna‘s Village of Peace.” In 2001, he travelled to Russia, South Africa, Poland, and India. In 2003, he toured Poland and Ukraine. His younger brother Pete who had become a drug addict accompanied him on a tour to Vrindavana, India. In 2004, he travelled to Argentina and Paraguay. In 2006, he toured Australia, Mauritius, and England, and took part in the Lord Jagannath Rath Yatra in Puri, India. In 2008, he toured Hong Kong, Poland, the US, and Australia. In 2011, he toured Brazil, England, and India. In 2013, he toured South Africa, India and Poland. He tours India and Poland on a regular basis and preaches the teachings of Swami Prabhupada and organises kirtanas. 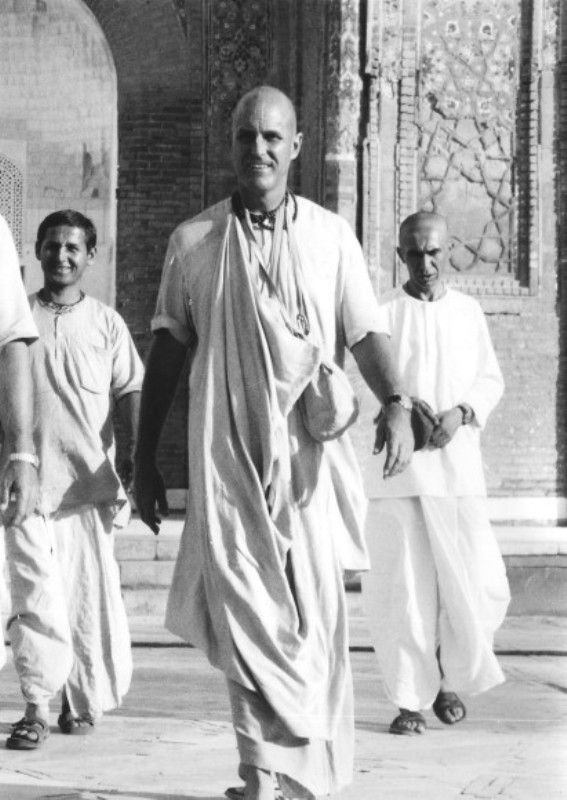 Indradyumna Swami near the palace of Timor in Samarkand 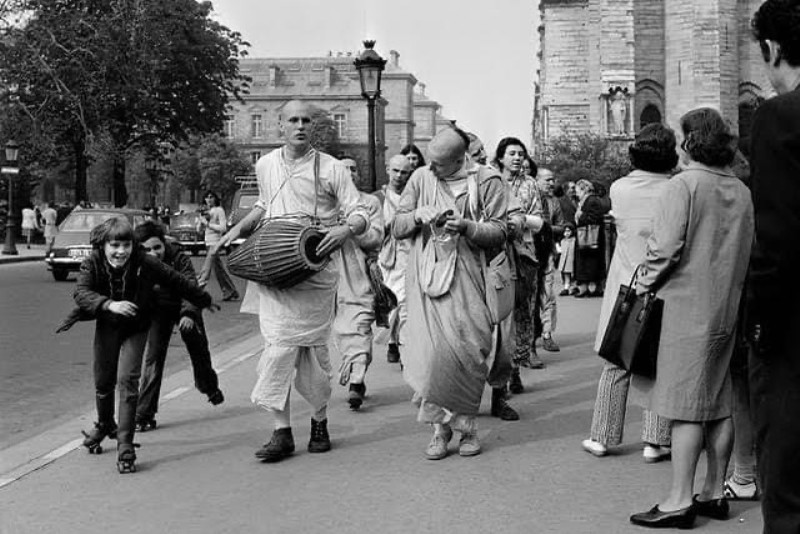 After the Tsunami in India and Sri Lanka in 2001, Indradyumna Swami managed the operations of Food for Life’s international relief effort to provide hot meals to 250,000 tsunami survivors in Sri Lanka. 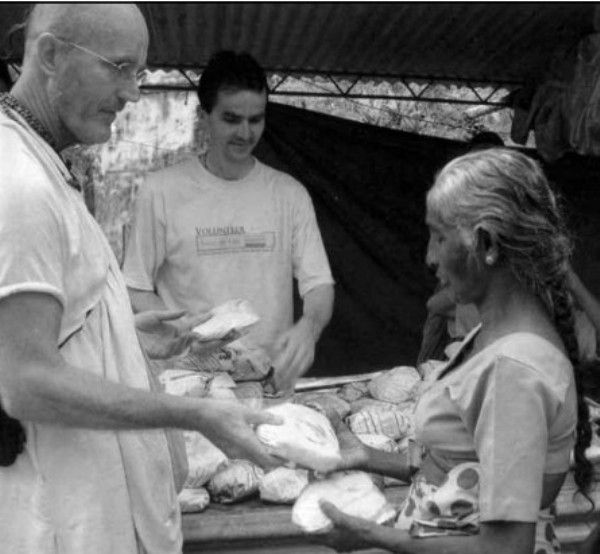 Many people have claimed that Indradyumna Swami is a paedophile and posted several videos and images showing him inappropriately touching children which have been denied by his disciples. It is also alleged that several instances of abuse have happened at his schools or gurukuls.